David Burnett has always been something of a rarity amongst photojournalists, unafraid of radically varying his way of seeing and photographing as the subject matter demands in order for a great story to be told.

His avoidance of cliché and technical perfection at the expense of that story is refreshing. There is no one single archetypal David Burnett image – instead there is a range of them and he is always experimenting, learning and growing.

Mr Burnett’s willingness to try out new things may well be the product of a freelance way of life, always needing to produce something different from what the staffers and longterm contractors come up with.

Only one thing is predictable about his photographs, that they will be emotionally engaging and graphically precise, and that they will tell a story alone or in context.

That precision and engagement are revealed in conversation and doubtless in his teaching. Seize any chance you can to speak with him, listen to his insights and especially take part in one of his photography workshops like The Creative Eye with David Burnett, details below.

Fujifilm’s GFX 50S medium format digital camera is more revolutionary than the most commonly shared images of it suggest. That is the first thought I had when I began exploring then downloading the product shots at Fujifilm UK’s image bank and I think it is only going to really sink in when more photographers than just the few manage to try one out. 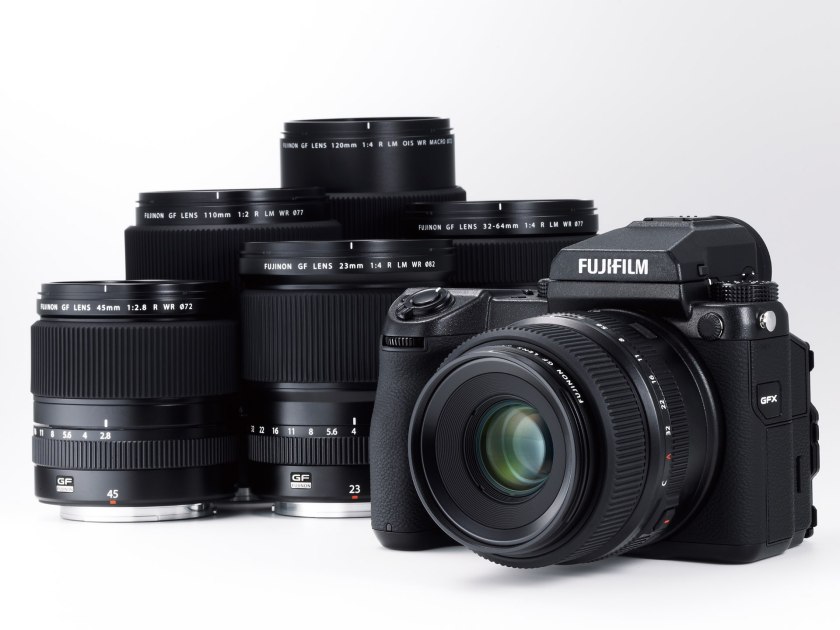 The press images hinting at the GFX 50S being more than meets the eye prompted me to download them all and publish them here, below. Specifications lists like the one further down the page are well and good, but seeing is where we will understand the real nature of this camera and its accessories.

The most obvious way of looking at the GFX 50S is as a larger version of the Fujifilm X-T2, but with a medium format sensor instead of an APS-C one. And in a way, that is correct. The GFX 50S has the external form factor of a DSLR except for the fact that we know the GFX 50S – with S, we assume, standing for SLR-like –is most certainly a mirrorless camera with all that implies about its lack of mirror slap and its ability to use an electronic or a mechanical shutter.

But then dig a little deeper. 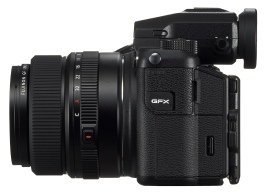 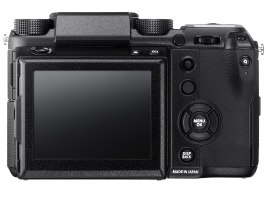 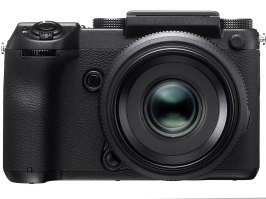 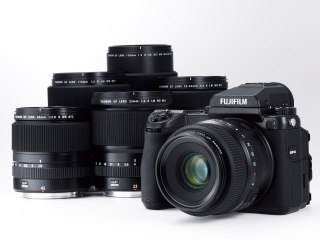 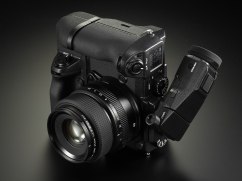 That pentaprism-like electronic viewfinder (EVF) unit is removable and yet, without it, the GFX 50S remains perfectly functional but as something more resembling a small view camera. Instead of a ground glass, it has a high resolution rear LCD screen.

So does the X-Pro and X-T2, like a slew of other excellent contemporary mirrorless and, for that matter, DSLR, cameras, all providing a live view that is perfectly adequate for using to compose, focus and create your photographs.

Contemporary mirrorless devices push digital cameras beyond the limitations of analog cameras in ways that mean I for one can never go back.

Fujifilm’s X-Pro2, for example, might be considered three cameras in one, in analog terms. In one way it is a small view camera not unlike the 120 roll film  Linhof Technika 70, one of two Linhof Technika cameras with which I learned professional photography, the other being a Linhof Super Technika 4″x5″ sheet film camera with optional roll film magazines and a case full of accessories. 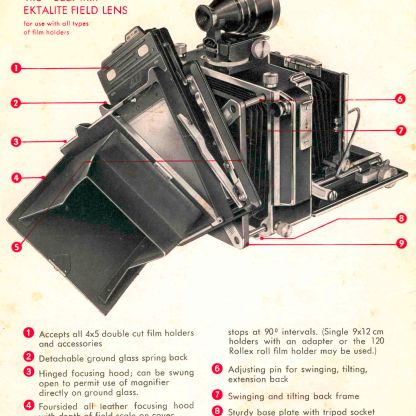 Although purchasing my own Linhof was beyond reach, the lessons learned on those two amazing cameras have stayed with me for life. They intimately shaped my portrait photography style.

Even when I used other view cameras, usually field cameras, for my work as a magazine portrait photographer, I often did so with a Linhof variable format 120 roll film magazine for more shots, faster operating speed and the choice of shooting square, rectangular or panoramic aspect ratios.

While I often find myself using the monitor of my X-Pro2 and other digital cameras as if a small view camera’s ground glass, there is no substitute for the real thing. It is all about the experience on both sides of the camera.

For me, a contemplative experience of care and precision. For my subject, an experience of respect, sometimes awe, and oftentimes an hypnotic fascination with this remarkable high precision machine into whose eye I was asking them to gaze, unflinchingly.

Although I learned that on an art school Mamiyaflex C330 TLR with interchangeable lenses, I chose Rolleiflex T and Rolleiflex 2.8G cameras for my professional use, for urban documentary and portraiture. All three left me with an appreciation of square format, 1:1 aspect ratio, for those times when I wanted to draw my viewers’ attention in so clearly it was like an arrow into the centre of a bullseye. 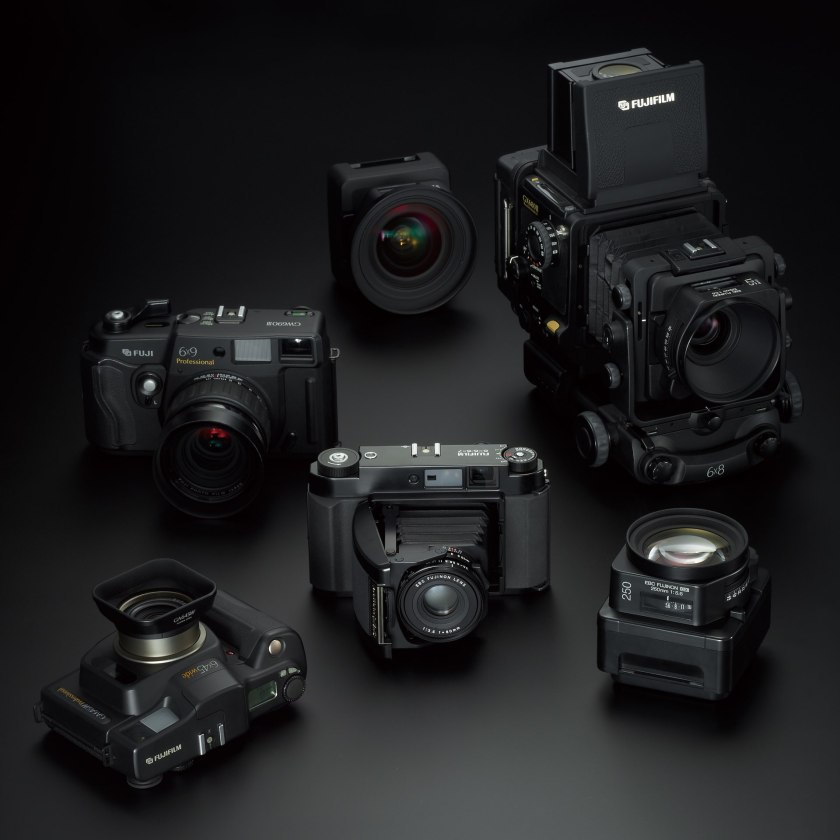 Rangefinder cameras have a special place in my heart to this day for their immersive window into the world, their sense of deep space and spatial relationships across the frame as well as forward and backwards.

After the demands of commercial work caused me to invest in 120 roll film DSLRs, while conceiving the magazine I later went on to cofound, I discovered Fujifilm’s GX680 Professional series, a remarkable creation combining the best of view cameras with the best of DSLRs, but one which regrettably, I never got to try out.

Another range of Fujifilm analog cameras that I was luckier with were its 120 rangefinder cameras that now live on in my hands in ghostly form as the X-Pro2.

When the late, great photojournalist-turned-landscape photographer Michael Reichmann favourably compared the Canon EOS D30 DSLR’s sensor to Fujifilm Provia 100F film, it was clear that digital photography had attained the ability to match the look of analog.

Fujifilm’s X-Pro 2, X-T2 and the coming X100F with their 24 MP sensors  produce image quality far above that of 35mm film, rivalling if not surpassing that of low ISO 120 format film. We have so much to be grateful for.

There is just one thing I am a little peeved about, though, and that is that we have lost the wide variety of cameras we had during the analog era.

We now have remarkable image quality to the degree that images made on medium format DSLRs can surpass the resolution of 8″x10″ sheet film as Mr Reichmann demonstrated in another of his famous reviews.

But what all this testing, side-by-side comparisons, digital up against analog and so on fail to do is consider the experience of the cameras and lenses in question, on both sides of the sensor, and what that contributes to the images we make with them.

Image quality is crucial of course, and I say that as someone who commissioned photographs for 48-sheet posters during my advertising agency days and who now is contemplating a possible return to the art gallery wall.

For me most of all the experience of the photographer and the subject is what reigns supreme and always will.

More GFX Challenges videos were released to go with the January 2017 announcement of the Fujifilm GFX 50S.