The reviews are from the perspective of a landscape photographer rather than a documentary photographer or photojournalist, and do not cover the lenses for use in video so look out for more specialized reviews if needed.

I have been pondering Fujifilm’s current XF optical offerings whilst reprocessing and uploading documentary photo galleries to this website in the light of ongoing frustrations with the company’s still limited lens collection, especially of lenses suitable for documentary cinematography and stills photography.

Belt-tightening for independent, self-funded creatives is ever-more prevalent nowadays given the constant predations against creativity by the pandemic and the federal government, so new lens purchases must be even more well-considered and well-researched than ever before.

I have been lucky enough to have borrowed three of the lenses Mr Nasurov reviews in his articles and agree with his many insights into them.

The XF 10-24mm f/4.0 R OIS was in contention but, as usual, funds were limited and I had several misgivings about the lens that I hope may be palliated by its mark II replacement.

Chief amongst those doubts are these:

All three Fujinon lenses reviewed by Mr Mansurov have their many and various virtues and varying price points, but the best bang for the buck, as it were, may well be from an optically and mechanically improved mark II 10-24mm zoom lens and I look forward to learning more about it when it is released.

I do prefer prime lenses to zoom lenses for the most part, the amazing Fujinon XF 8-16mm f/2.8 R LM WR aside, and so the XF 14mm f/2.8 R reminds attractive despite its age and lack of weather resistance, and that I prefer the manual clutch focusing approach Olympus has taken with its M. Zuiko Pro lenses to Fujifilm’s more limited implementation.

Meanwhile those many and various virtues of all four superwide lenses are well-covered by Mr Mansurov’s excellent set of reviews, links below.

“A modest dissertation on the X-Pro3 development announcement, clickbait and the diminution of language.”

“It’s been a while since Fujifilm released a wide to medium range zoom lens, especially with both OIS and WR. Previously, the only general range zoom lens that had both features was the big and bulky XF18-135mm lens. My hope was that Fujifilm would re-make the XF18-55mm f/2.8-4 R LM OIS lens to be XF16-55mm f/2.8-4 R LM OIS WR. Instead, Fujifilm decided to keep the original kit lens and create the new XF 16-80mm f/4 R OIS WR. Who is this lens for? It really depends. If you own the X-T3 and you really want a mid-range zoom lens with both OIS and WR, this is the only option you have. However, if you own the X-H1, would you be better off with the XF 16-55mm f/2.8 and put up with the size and weight of a professional lens? “

Good to see that photographers are receiving pre-production copies of Fujifilm’s Fujinon XF 16-80mm f/4.0 R OIS WR and, as usual, even more reviews will be appearing when production versions of the lens make their way into the world.

When I was photographing the climate strike rally in Sydney on September 20, I found myself wondering how the 16-80mm f/4.0 zoom lens might change and even improve the way I cover such subjects.

See my personal Instagram account for documentary photographs of the rally and other events, recently mostly using prime lenses on Fujifilm cameras as Panasonic Lumix camera and lens loaners have been in short supply. 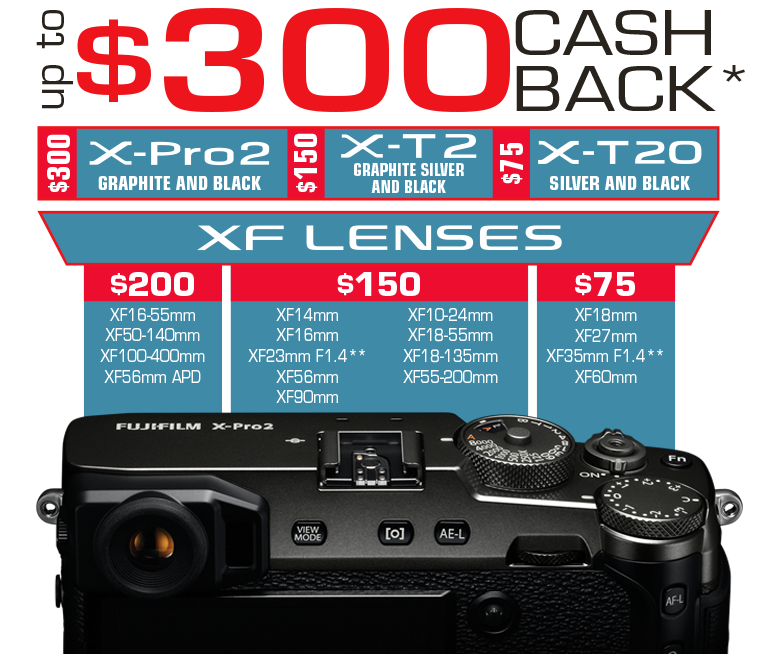 “In my last video I went through my bag of lights. For this video I walk you through my bag of cameras and lenses. I’ve spent a lot of time streamlining my gear to the essentials and it has really helped clear my head and make life easier for me. I was constantly moving from bag to bag and one set up to another depending on the job at hand. I wanted to simplify my photographic life to a bag of cameras and a bag of lights.

While I feel my bag of lights is complete, I’m not so sure yet about my bag of cameras. I’d really like to add the Fuji GFX to this kit to be a back up to the Phase One and to be my run-n-gun camera. I’m still trying to decide if that will be the best option for me and the work I do….”

“… 3. To be eligible to claim the applicable cash back amount, an eligible individual must purchase one (1) of the selected FUJIFILM X series cameras AND one (1) of the selected lenses listed in section 9 of these Terms and Conditions in a single transaction (an “Eligible Purchase”) from an authorised Australian participating dealer/retailer during the period commencing 1 st June 2017 and ending 31st July 2017 (“Promotion Period”). For the avoidance of doubt, this promotion does not apply to any of FUJIFILM’s X series cameras or lenses that are not listed in section 9….”