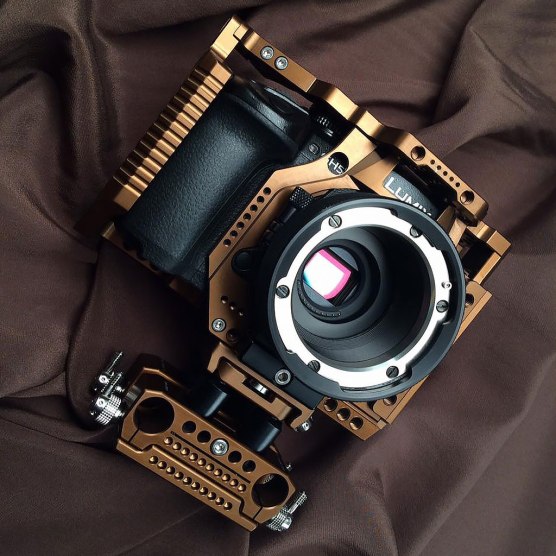 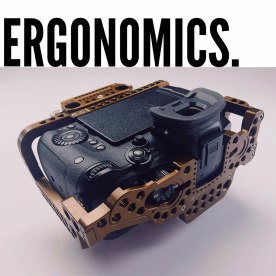 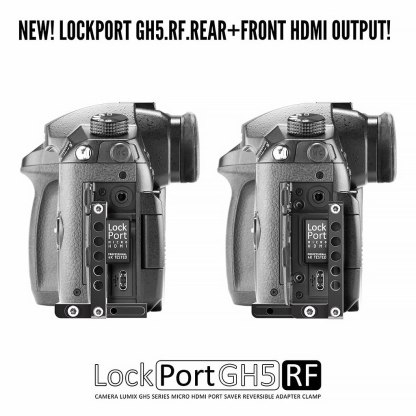 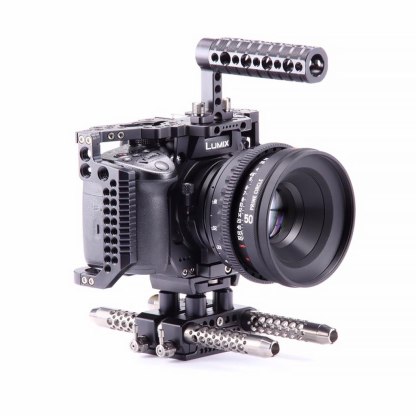 Its attention to detail is astounding, the design effort apparently aided and abetted by Sydney-based Director of Photography/Producer Clinton Harn ACS, and clearly aimed at those whose needs and budgets ensure that only the best will do.

I came across LockCircle’s Robot Skin GH5 while comparing and contrasting GH5 camera cages I have seen and tried in real life with the many available online, and no others came close to it in terms of design, functionality and manufacturing quality.

LockCircle’s International Resellers page, alas, does not list any Australian importers or retailers but the Robot Skin GH5 may eventually appear at B&H Photo in which case I will add links to the affiliate links list at the base of this page.

For those of us for whom LockCircle’s cage might be financial and mission overkill, it may be wise to compare these three Robot Skin GH5 bundles to other manufacturers’ versions.

So far the other GH5 cages that have impressed are those made by Movcam, Seercam and SmallRig, with 8Sinn’s GH5 cage showing promise that may be fulfilled if the Polish company issues a revision that allows access to the GH5’s remote port.

Clicking on these affiliate links helps us continue our work for ‘Untitled: Stories of Creativity, Innovation, Success’.

Note: 8Sinn and SmallRig products are not retailed at B&H Photo Video with which we have an affiliate relationship, but we use and recommend the following camera cages for the Panasonic Lumix GH5. LockCircle products are retailed by B&H but the Robot Skin GH5 has yet to appear there. When it does, we will add those links below.

Camera accessories maker Seercam has released the Cube 6X, a camera cage for Super 35/APS-C hybrid stills/video cameras in Sony’s Alpha (aka alpha or α) mirrorless interchangeable lens E-mount camera range and, from studying its design and manufacturing details and photographs, it is a must-have for all owners of cameras in the range which includes the α6500, α6300 and α6000. 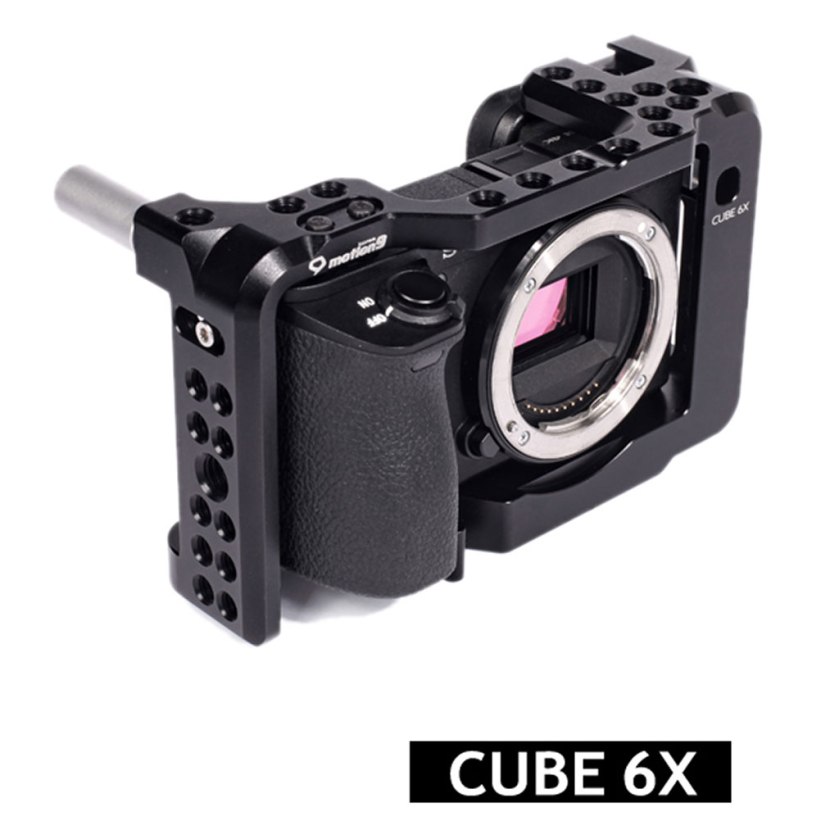 Seercam, continuing the tradition the company set under its former brand name Motion9, has produced a cage with all the often unique and always top-tier design and manufacturing values for which the brand has become respected.

The Motion9 website appears to no longer be available but I have located some archive images of the company’s cages for the BMPCC, Panasonic Lumix GH4 and Canon EOS 5D Mark III cameras, from left to right below. 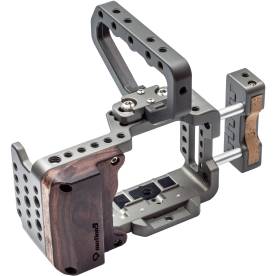 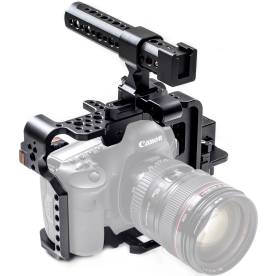 It is no secret that I am a fan of Seercam’s cages due to their design and manufacturing quality, and consider them the default go-to cages whenever acquiring a new camera. That consideration is well supported by their sturdiness and ability to safely support attaching all the third-party accessories upon which moviemakers have come to rely.

While it is true that some other cage makers come up with cheaper, lighter and smaller cages, usually designed in the screw-tapped-ribbon style consisting of a narrow aluminium loop in one piece or screwed-together around the camera, Seercam’s unibody cages offer protection and thoughtful design features rarely seen elsewhere.

I will add more and larger photographs here as I receive them. 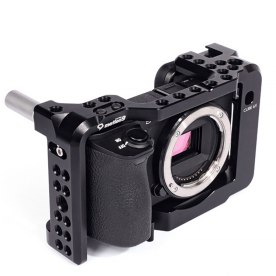 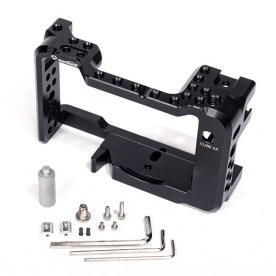 It is often the little things that make all the difference. In the case of the Cube 6X, that includes Seercam’s customary silver-anodized screw-in righthand finger support, two built-in cold shoes with the option of attaching more as needed, pinky finger support on the base of the cage, and cage-mounted push-button video recording functionality allowing easier and faster access than the sometimes bizarrely positioned video buttons to be found on Sony cameras.

I rarely shoot video without mounting my camera in a cage, the only exception being when I attach a battery grip, and enjoy the extra grip, added protection and counterbalancing of large, heavy zoom lenses that well-designed cages such as Seercam’s afford.

The Seercam Cube 6X is available in three configurations, as a cage body-only, or with Classic Plus Handle, or also with Rod Riser 1565.

Seercam has released its Cube GH5 cage for the Panasonic Lumix DC-GH5 camera and it is impressive, a major leap forward from the company’s GH4 predecessor camera cages the CubeMix GH4/3 and CubeMix GH4/3 Pro that were released under the Motion9 brand. Cage designs tend to fall into either of two fundamental types, minimalist or full wraparound, and Seercam’s design is uniquely not only almost fully wraparound but also protective. I’m impressed.

I have been reading online about cages by other makers and it appears the vast majority have chosen the minimalist route with lightweight designs that are, in essence, perforated aluminium straps wrapping around the GH5’s widest dimension.

Seercam, just as it did under its former Motion9 moniker, has followed the path of maximum protection and maximum support, with two cold shoes built into the body of the cage and plenty of threaded mounting holes all over for extra cold-shoes, Arri rosettes, NATO Rails or dovetail rails for any number of accessories as needed.

Seercam’s Cube GH5 cage with two other cages for comparison

I photographed the Cube GH5 along with a Motion9 CubeMix GH4/3 cage and a minimalist-style SmallRig cage made for the Panasonic Lumix GX8. Please refer to the captions for further information. 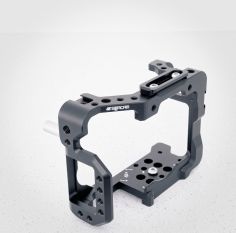 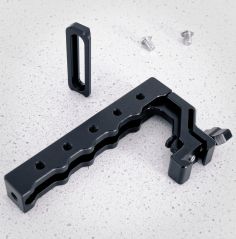 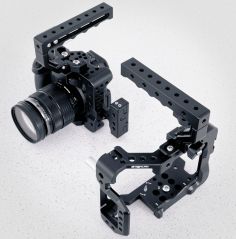 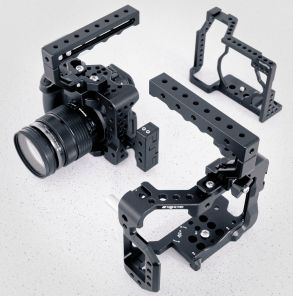 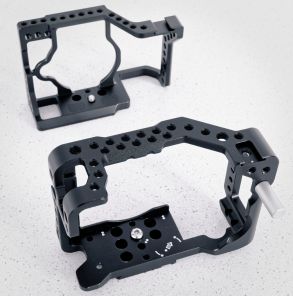 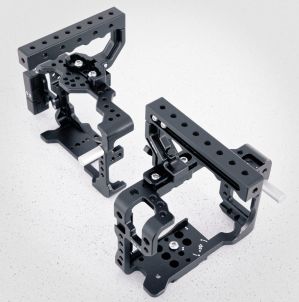 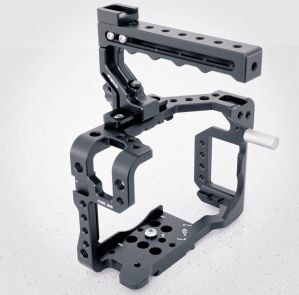 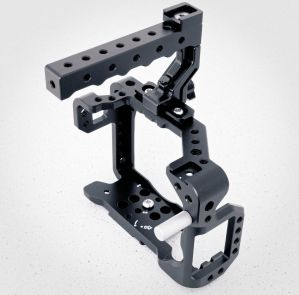 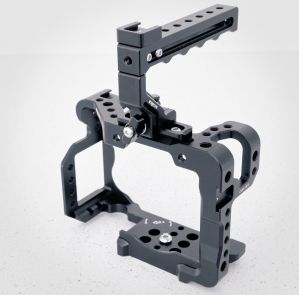 Why a First Look?

This article is subtitled “First Look” due to the fact that I am waiting for delivery of a GH5 review loaner but did not want to delay sharing my observations and experience of Seercam’s Cube GH5 cage.

I have used and loved the cage’s predecessor for the GH4, the original CubeMix GH4/3, for several years now and it has proven itself time and again in the field, on tripods and most importantly in the hand with or without all sorts accessories attached. I expect the same of Seercam’s Cube GH5.

From the many design advances the Seercam team has built into their GH5 cage, it looks like the experience of using it with a GH5 will be even better. In the absence of an actual GH5, the best I can do right now is share photographs of the Seercam Cube GH5 cage along with Motion9’s CubeMix GH4/3 and a minimalist cage for one of the GH5’s sister cameras, the Panasonic Lumix DMC-GX8.

I have avoided showing the base of the cage as I don’t have the rod riser made to go with it and some questions about how cage and dedicated riser fit together remain for the time being.

Work-in-progress shots of an extension kit currently being designed by Seercam for their Cube GH5 cage.

The folks at Seercam are working on an extension kit for the Cube GH5 cage to raise the handle up for the GH5’s XLR audio unit and attach a long 15mm rod for mounting side handles, monitors or accessory arms. I hope to receive one in due course. 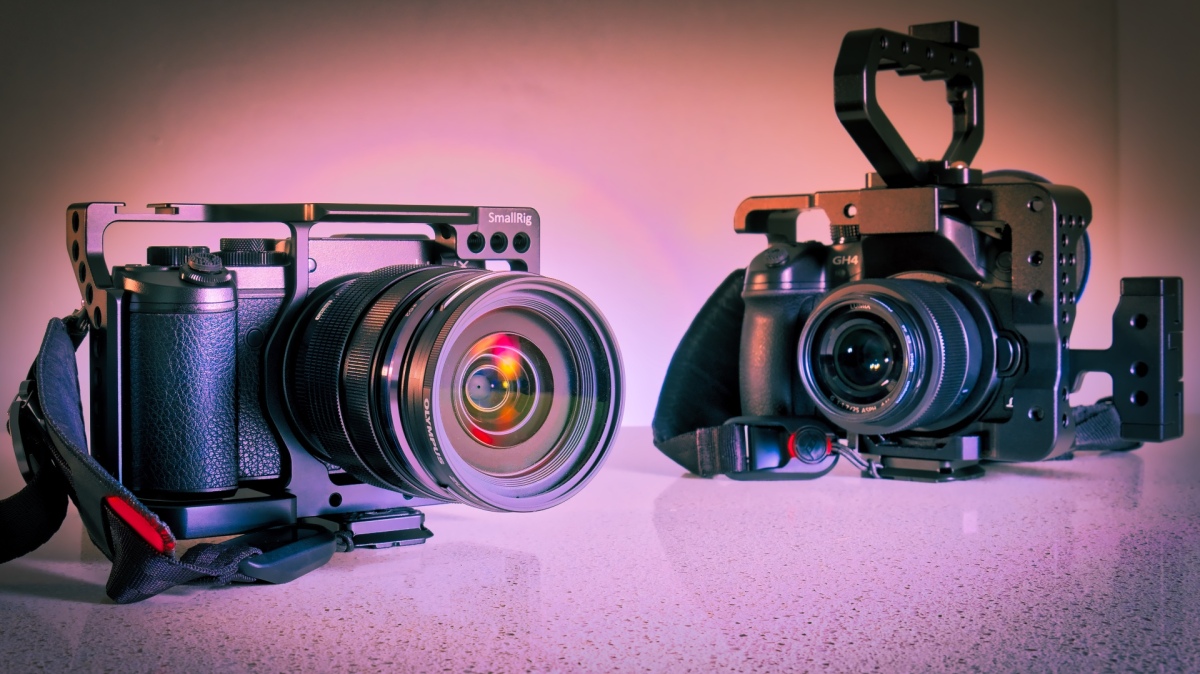 I love using custom camera cages when making movies with small, mirrorless Super 16/Micro Four Thirds or Super 35mm/APS-C hybrid cameras. One such cage saved my only camera at the time and thus saved my career, not so long ago.

The recent arrival of a custom cage for my Panasonic Lumix GX8 camera means I feel a whole lot safer toting it around in public while shooting video.

And, it got me thinking about the current state of the art of cages and rigging for any camera, whether my GX8, my GH4 or Fujifilm’s X-T2, which has so much currently unfulfilled potential as a movie camera and which could be the best affordable Super 35 video camera if Fujifilm adds some crucial features to its firmware.