On 22 Seprember 1918, Ernest Fisk, head of AWA (Amalgamated Wireless Australasia) and Raymond E. McIntosh (and a host of other engineers) received a direct transmission from Marconi at his Caernarfon station in Wales. This was cited as the first (major) direct radio communication from Great Britain to Australia, the message received at Fisk’s home, ‘Lucania’ at Wahroonga on Sydney’s north shore. 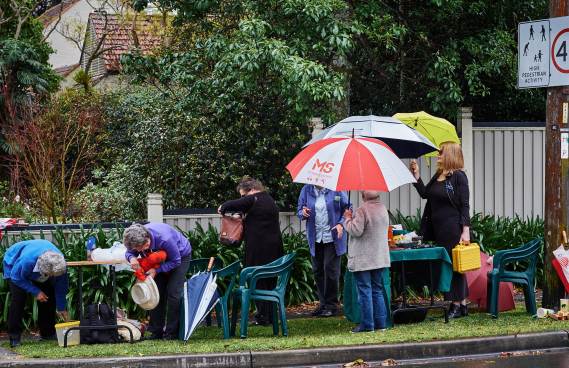 Each year, Ku-ring-gai Historical Society (KHS) members celebrate this event at Wahroonga outside the home where a memorial was erected in Fisk’s honour. The weather was not kind today hence the limited photos available. But why mention a moment in history that many have forgotten? Simply put, our screen-tapping user-centric world of digital technology – much of which is taken for granted – has all evolved from the communication efforts of Marconi, Fisk and the many experimenters at AWA. The event is seen as a milestone in Australia’s long history of science, engineering and discovery, of which many home-grown inventions are used worldwide to this day, such as underwater torpedoes, black box flight recorders, electric drills, pacemakers, cochlear implants, Wi-Fi and more.

KHS is also custodian of the bronze statue of Mercury (Roman god of all things business) who leaps proud from atop the monument ‘radio mast’. Mercury has had an interesting past, having been stolen from the monument years ago, and I am told found later in a trash yard. From the photos he appears to be trying to get away from being bagged again, but now he is safe from thieves and flying poopers by the good work of the KHS.

There are plans for a special 100th anniversay in two years’ time. Let’s see if we have the skills to propogate a return signal to Wales using modest radio components. The local Hornsby and District Amateur Radio Club (HADARC), along with the Ku-ring-gai Historical Society, will have a field day, so to speak, with a good display of old and new technology.

A true example of innovation and success that changed a nation, let’s not forget too that amateur radio still has relevance, as it’s a fundamental hands-on activity that explains the workings of radios, digital electronics/packet transmission, computers and cell phones ‘under the hood’ – all these things we enjoy today, thanks to our radio pioneers.

Having made my own 7MHz contact from our home in Wahroonga to Porthmadog, North Wales, it certainly is an exciting experience, using nothing but a low power transceiver, a dipole antenna and the ionosphere.