About Unititled.Net & (not only) Black+White

More years ago than I care to remember now, I had an idea for a magazine about creativity, innovation and success in the arts in Australia. I was working as a photography teacher at the very same university art school in Perth where I had fought for so many years to obtain a decent photography, filmmaking and fine arts education for myself and others.

My list of primary aims for the magazine included encouraging a higher level of thought about these things, killing off the Australian Cultural Cringe, giving photographers a high quality venue for their photographs and placing the work of Australian artists in all media in the same spotlight as their non-Australian counterparts.

It was a pre-digital publication, high quality, costly to produce and beyond my own means to do so. After I got to Sydney I searched for a mainstream publisher to take it on, eventually found a tiny independent who did so only very reluctantly, made a deal of sorts and got to work. The magazine came to be known as (not only) Black+White. It was more often publicly referred to as Black+White.

I had been freelancing as a magazine photographer and sometimes writer at the time, specializing in quirky but emotive portraits and reportage for mainstream magazines and newspapers. There were no other writers available who knew how to suit the aims of the magazine so I swapped camera for computer and became its first “staff” writer though always on a freelance behind-the-scenes basis, then its London-based European Contributing Editor on a similar basis. My first article, published in another magazine by the same publisher as a tester, was an interview with the great German-Australian fashion and portrait photographer Helmut Newton, illustrated with a collection of his work.

It did not take long for (not only) Black+White to become one of the most popular magazines ever in Australia. Every two months, huge stacks of the latest issue would hit the newsstands and be sold out within days, despite the magazine’s high cover price, the highest of any Australian magazine at the time. People of all stations in life bought every issue for years to come, not just members of the creative community.

Soon, the host of the most popular Australian talk show featured the magazine on his program along with the actress featured on the cover of the then current issue. The host waved the magazine about on camera and asked, how did anyone manage to come up with a magazine of this quality in Australia?

The magazine had a profound effect on Australian creative culture, and on the lives and careers of Australian artists in all media and especially photographers. We gave many of them their first opportunity to be published and a number went on to build successful careers overseas. Even today, photographers and directors tell me it showed them that Australian creative people really could chase their dreams and succeed.

The magazine finally crashed for financial reasons, after I had stopped working for it, and most Australians, creative or otherwise, have little to no memory of it now. But some do, and Australian creative people often ask me to revive (not only) Black+White. “We need it now more than ever before”, they tell me.

I have no plans to revive (not only) Black+White as a printed publication, and have tired of writing full-time as I did for some years. Recent developments in the digital world have made photography and moviemaking attractive and affordable again. Time to go back to telling stories in photographs and moving images, supported by words and sounds, online.

Time to help create positive change in Australian culture once more, by telling inspiring, educational stories of creativity, innovation and success? Time to complete that portable moviemaking and stills photography kit and get to work?

Time to publish that content here at Unititled, perhaps? Or not.

About the magazine’s origins and history 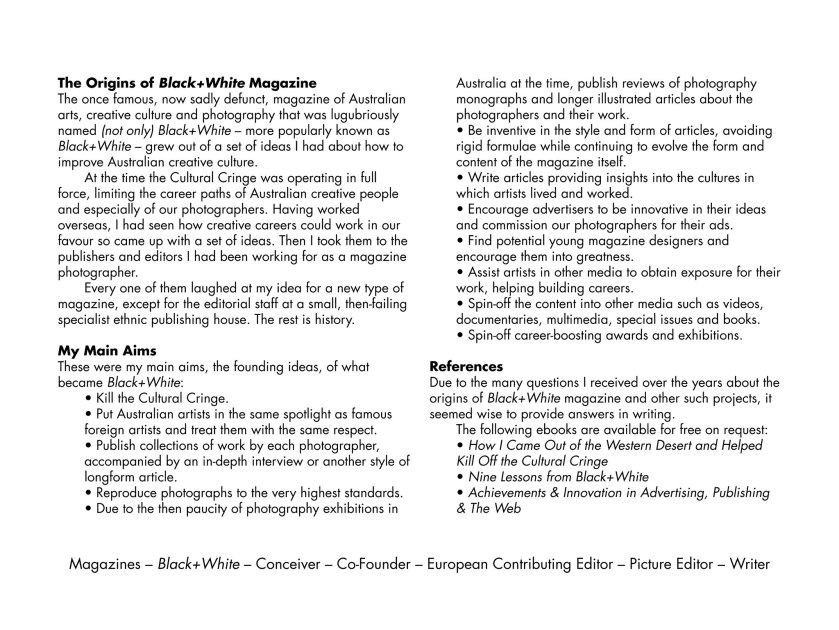 If you are interested, here are some ebooks about that period in the 1990s and 2000s:

If you wish to make a donation to support our work here at Unititled.Net then please use PayPal.Me/KarinGottschalk.

Please also consider donating to our favourite charitable cause, Lefty’s Place, via PayPal.Me/leftysplace.

Website and its contents © copyright Karin Gottschalk 2022. All rights reserved.