Australian audio brand Røde Microphones, part of the Freedman Electronics Group along with Aphex, Event Electronics and SoundField, celebrated its 50th year at the group’s RØDEShow 2017 event in Las Vegas earlier this year. Six new products were announced during RØDEShow 2017 with two specifically of interest to filmmakers, the VideoMic Pro+ and the VideoMic SoundField.

Røde Microphones made a major contribution in turning the then dirt track of audio recording for independent video production into a sealed super highway with its very first on-camera video microphone, the VideoMic, released in 2004.

Since that first innovation the market-leading company has released a series of new and updated video-centric recording products along with top-end microphones for audio studios and live music recording on-location.

It wasn’t so long ago that Røde revised its VideoMic and VideoMic Pro hotshoe-mounted shotgun mic lines with the addition of Rycote Lyre shock mounts, reportedly the best such mounts in the business.

Since then Rycote shock mounts have found their way into all new Røde video microphones with Røde investing in a computer-controlled manufacturing machine to turn out its own Rycote Lyre mounts under licence.

I had the pleasure of a guided tour of the Røde factory over a year ago and it was an impressive facility back then. With its ongoing R&D, recent new Freedman Electronics Group acquisitions, new products, new staff and new computer-controlled manufacturing machinery, the Røde factory is no doubt even more impressive now.

The new Røde VideoMic Pro+ flagship monaural on-camera directional mic is heir to a tradition begun almost thirteen years ago, before the DSLR moviemaking revolution sparked off by Canon adding Live View video capability to its Canon EOS 5D Mark II at the special request of the Reuters news agency.

The original Røde VideoMic was a child of its time, when camcorders were king and the Sony PMW-EX1 Full HD camcorder was the weapon of choice of independent documentary moviemakers along with Sony wireless lavalier and shotgun microphones.

The EX1 and its stablemates were far too costly to own. You had to rent them day-by-day or on a weekly basis, and indie documentarians could only do that if they succeeded in running the gauntlet of funding bodies, broadcasters and any other organization, or politician, with an interest in the story you were proposing to tell.

The directional microphones of the era matched the size and cost of the cameras they were created to work with. The arrival of Røde’s VideoMic turned all that on its head. At about 25cm in length, the original VideoMic suited the length of the camcorders of its time but it was affordable enough for moviemakers like me to buy, not rent.

The current Rycote-equipped VideoMic Pro is a more compact proposition at 17cm in length and a better fit for the 4K mirrorless stills/video hybrid cameras starting to make a real dent in independent filmmaking.

The Røde VideoMic Pro+ may be same size or a little larger, but its innovations are big, with flocked microfibre replacing former models’ detachable windshields and the same sophisticated circuitry and switches of Røde’s high-end Stereo VideoMic X aka SVMX.

The hinged battery door – no more dropping or fumbling on location especially when in extreme conditions – is so welcome as is the coming lithium ion rechargeable LB1 battery.

I am a fan of removable screwed-in audio cables – I am sure there is a better name for them – from when I owned my own Sony wireless lavaliers. I am looking forward to trying the VideoMic Pro+ out – there is little doubt it will be as popular as the very first VideoMic.

Røde’s VideoMic SoundField may be something of a sleeper amongst those unfamiliar with the world of ambisonics but it is something my research into alternative recording methods touched on several years ago.

Back then the most achievable combination of surround with directional audio miking was the mid/side method which required encoding/decoding with audio plug-ins like Voxengo‘s free Mid-Side Encoder-Decoder aka MSED. 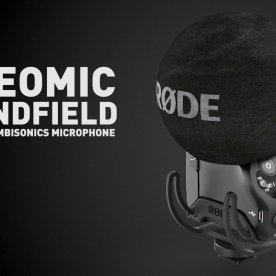 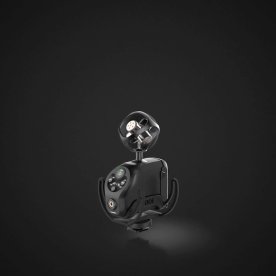 I ruled out mid-side recording due to it being too unwieldy for one-person crew field use, without investing in a whole new M/S-miked field recorder. Røde’s all-in-one VideoMic SoundField microphone is a whole other proposition that could conceivably replace two or three different types of microphones with the common pick-up patterns illustrated below with just one mic that has all three patterns built-in.

Or in effect, far more than three audio output patterns. I am still at the start of learning about the ins and outs of ambisonics recording and processing so the best I can do is point you to some online resources, below.

My hope is that Røde will write their own book, as it were, on ambisonics so that the applications and processing methods of the VideoMic SoundField microphone and its output will be well-known on its arrival. Clearly Røde has the in-house expertise to do so with the Freedman Electronics Groups recent company purchases.

So far though the book has yet to be written about how to to get the best out of the hardware and how to best process ambisonic audio files. I have begun the research process early, before the microphone is expected to be released, in order to be ready.

It is an ongoing process, but so far I have found two free items of software, the standalone Harpex Player, above, and the SoundField SurroundZone 2 plug-in. Harpex also makes a premium-priced plug-in available for a 30-day free trial or for purchase at €498.00 ex VAT.

Search in any search engine for ambisonics plug-ins or free ambisonics sample audio files with the suffix .amb and you can get a head start on understanding this fascinating audio format and how to process it.

There are also some good learning resources available, including Welcome to the Wonderful World of Ambisonics, A Primer, by John Leonard, at the A Sound Effect website. A Sound Effect has a number of ambisonics sound effects libraries available for purchase.

At the moment I am trying to work out how to use these plug-ins in my DAW of choice, Apple’s Logic Pro X as companion to Final Cut Pro X.